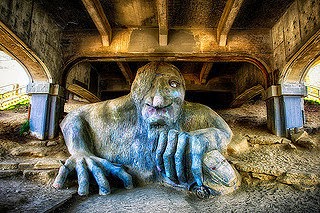 I don’t know when or how he became the troll living under the bridge. I’m sure it started slowly. I noticed that every year he had a bit more hair growing out of his ears and his stoop was getting more pronounced. The rules for crossing over the bridge were getting much more complex and usually involved a riddle: “You should know why I’m upset.”

Sometimes I’d try and reason with the troll. “Shouldn’t we be able to cross the bridge without the riddles?” That was before I found out trolls are really hard to reason with.

Although my troll was male, there are an equal number of female trolls. No, they are not called trollops!

Do you have a troll in your life? Here are some examples of troll behaviours.

How about you? Do you know or work for a troll?

It’s almost impossible to trust a troll, especially if they are not willing to change. If you’ve ever read stories of trolls, you should know not to engage them in their game. In the end, it is the honorable knight or valiant warrior who destroys the troll and doesn’t let them block the bridge. It takes someone who has power to take on that role. In fact, sometimes it takes the whole village to rise up to defeat them.

If that isn’t a possibility, find out what you can trust about their behavior, even if it is trusting them to be who they are and preparing yourself.

Don’t allow them to stop your progress.

Find another way to get to your destination, even if it means leaving and finding another bridge to cross. Find your happy ending.