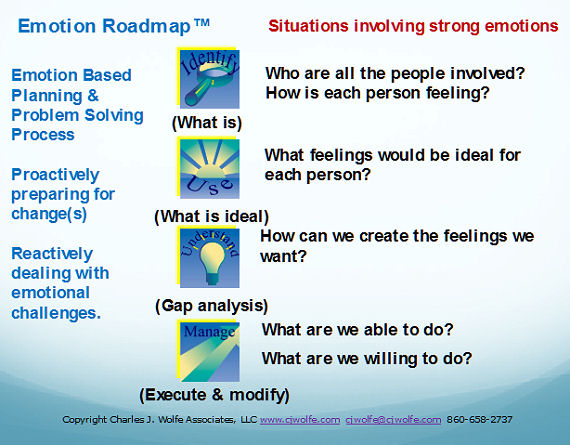 It’s wonderful to be able to work with someone you’ve admired for many years. I had that opportunity when Chuck Wolfe and I co-wrote a workshop on trust. With Chuck’s permission, I’m sharing his Emotion Roadmap that we use in our workshop. It has been an important part of  being able to help people in the class learn how to trust themselves and trust others.

When we were getting work done on our yard, I was feeling increasingly frustrated with the lack of response from the landscaper. Calls and emails were going unanswered. I felt ignored, and increasingly suspicious and distrustful. We had given them a very substantial deposit and I was worried they had taken our money and were having a party at our expense. The promised start date came and went and, although the administrative assistant assured me they were just delayed, I didn’t really believe her. My husband didn’t seem to be concerned so I stepped back and used a tool that my friend Chuck developed.

Chuck Wolfe’s Emotion Roadmap was conceived as a result of a strategic alliance with the pioneers of emotional intelligence, Dr Peter Salovey, President of Yale University, Dr Jack Mayer, Psychologist at the University of New Hampshire, and Dr David Caruso, also affiliated with Yale. This group sought Chuck’s assistance in 1999 when they asked him to develop ways to make their scientific discovery useful to people at work. Along the way Chuck found that the Emotion Roadmap tool was effective for helping others manage their emotions, improve their interpersonal relationships, and work through issues or problems.

Another contractor I trusted had referred Avi to me so I hadn’t researched to find out what others had experienced. If I had I would have discovered what I learned the hard way. His work received top marks from everyone who had hired him, but the biggest complaint was that he didn’t communicate very well. In fact, all of the bad reviews were from people who had not hired him, but had been turned off by his seemingly indifferent attitude toward them.First I had to figure out what everyone was feeling. I knew I was feeling frustrated, dismissed and disrespected. Avi, the landscaper, seemed to be feeling indifferent. He was busy, had my money, and didn’t feel any need to get back to me. I wanted to fire him before he had even started.

I wanted him to feel accountable and engaged. Sending him emails and even leaving messages didn’t seem to work. So, I went to his office. I told him how I was feeling. The look of shock on his face reassured me he wasn’t trying to run away with my money.

He apologized and asked me what I needed to know. We agreed on a start date with a promise from Avi to inform me of any changes, problems or delays. The problems that came up were discussed with my husband and I, and we were really happy with the finished job.

Try using this tool the next time you’re in a difficult situation. If you’re like me, sometimes the most difficult thing to do is to step back and actually think about feelings. Trust me, this works.