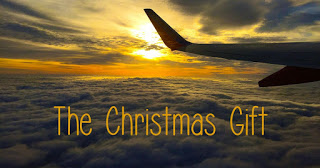 It was my first big paycheck and I was flush with the possibilities of all that I could buy. Should I invest? Travel? Buy designer duds? None of those ideas felt right. After much thought I decided to surprise my parents and buy them return tickets to England to fulfill a dream they had talked about for years.

Christmas was approaching and I imagined their faces as they opened up an envelope with two return tickets to London. They had never traveled further than a few hundred miles from their home and often talked about “some day” being able to go to England and visit their friends, Tom and Jean. Dad was a blue-collar worker and my Mom worked in the accounting department for Sears. Somehow they had always managed to put enough food on the table and pay for the mortgage on their tiny house but there was never any money left over for luxuries like travel.

Now they were empty nesters and were enjoying a time of abundance, which to them meant there was enough money left at the end of the month to go out for dinner and a movie.

Christmas day! I waited until all four of my other siblings were at Mom and Dad’s house before I gave them the card with the letter from the travel agency. I had prepaid for two economy tickets from Calgary to London and the travel agency had a refundable travel voucher made up. All Mom and Dad had to do was call them and give them the dates.

Dad handed Mom the card and told her to open it. I watched their faces. When she opened the envelope and read the letter her eyes filled with tears. Everyone was excited for them, and I loved the feeling of pride and gratitude from making their dream come true.

A week later I got a call from the travel agency. I thought it would be to tell me that my parents had picked the dates for their trip but, no, it was to tell me my parents had cashed in the tickets. My heart sank.

When I called my Mom to ask her why she canceled the tickets, she was terse and to the point. She told me the stove they had was starting to go and they decided the money would be better spent on something practical. I got off the phone and cried. I knew that was just an excuse and felt angry at what I knew was her fear of the unknown.

A good friend told me that when you give a gift, it is no longer in your control. It was an important life lesson for me. All gifts must be given without expectations.