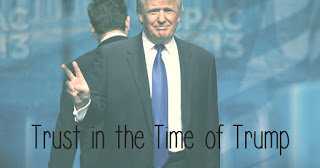 This is neither a rant against Trump nor is it a pro-Trump article. As a trusted expert, I want to understand why he was trusted with the highest office in the most powerful nation on earth. This is my perspective of why people voted for him. If you have been following my articles, you know I have said truth telling isn’t part of my trust model. Truth can be very subjective, and your truth may not be Trump’s or even mine. (Full disclosure – and this shouldn’t be a surprise to anyone – if I could have voted in this election, I would have voted for Clinton.)

Many people who voted for Trump were disenfranchised and did not feel Washington understood them. I have heard again and again that change needed to happen, and Trump could be trusted to disrupt and change the status quo. When you have not felt heard or represented, and someone comes along who gives voice to your anger and frustration, the trust level goes up. How can you believe you are cared for when, year after year, you see your life and standard of living going down? He wasn’t a groomed and slick politician who spoke in condescending platitudes. He was earnest and raw, and whether you agreed with him or not, people who voted for him felt he cared for America and cared for them. That is the first C – caring – in my 5 C Trust Model. People who voted for him believe he cares.

With unflagging energy, we saw a man who did not back down. Again, whether you agreed with him or not, he was out, front and center, committed to winning the election. He has said he will bring that same level of commitment – the second C of trust – to his presidency.

“I will make America great again. I will build a wall. I am strong; other politicians are weak. I am the only one who can make things better.” He was always consistent about bringing about change. Over and over again we heard a consistent message. Consistency is the third C.

The Trump brand is around the world and is associated with class and power. When people were asked why they would vote for him, many pointed to his ability to build a billion dollar business. His competence – the fourth C – and the belief that he ran a successful business resulting in his money and power made them trust him. I’m not saying he will be a competent President. That has yet to be seen, but he is perceived to have a high level of competence in running his empire.

The final and fifth C is communication. From Twitter communications at 3am to calling into radio shows to give his opinion, Trump communicated. At his rallies, people felt that he was talking directly to them, not at them. While his rivals were spending millions on advertising, he knew he could turn the focus of the media to talk about him without spending a cent.

When I was having a conversation with a friend and told her I was going to write about Trump and trust, she looked at me in disbelief. “But he can’t be trusted – I will never trust him,” she said. “How can you write trust and Trump in the same line?”

I hope this helps her to understand how he was trusted. Now is a time for healing, and trusting that good people used their best intention to vote for what and whom they believed in.