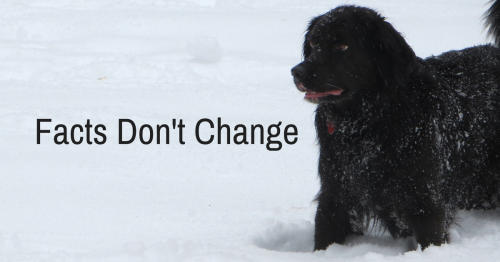 It is a cold miserable, ‘out like a lion in March’ time of year. My shoulders and back are still sore from shoveling the heavy wet snow off the driveway, sidewalk and walkway. Ouch! I wish I could walk out the door to better weather, which is what I’m sure, our dog Athena thinks can happen if she just asks the right person.

After a storm they named Stella (you know it’s bad when they actually name the storm), Athena had to go outside. She let me know by coming up with her big Newfoundland paw and giving me a whack. There is no mistaking the request. When she got to the door and poked her nose out, she gave me a look that said, “You’ve got to be kidding,” and turned around and went to lay back down by the fire. I stood there with the door open for a moment trying to convince her, but there was no way she was going outside.

After a few minutes, she went to my husband Ric and whacked him. Yes, we’re those people that have conversations with our dog and telling her how ridiculous she was behaving didn’t stop her. Since I was closer to the door, I opened it, but she gave me one of her looks and refused to even consider it. She knew the weather she could expect if I let her out!

Whack… Ric got hit again. After whining and not giving up, because she obviously really needed to go, Ric got up and opened the door. She was ready to do the same retreat, except this time she had one foot outside before she started to turn around and got a push, and the door closed behind her. She wasn’t very happy with us for not changing the weather as she had asked, and for making her deal with the reality.

Have you seen this same behavior in people? I have. They don’t like the facts they are given so they try going to another person to see if they can get the answer they want. It doesn’t work that way. If there is a storm outside, you can wish and visualize for sunshine all you want but, unless you change your location, it’s still going to be storming.

Facts don’t change because we don’t like them but they can spur us on to make positive changes. I’ve booked my trip down south and leave in a week. How about you? What fact or facts are you having trouble accepting? What changes do you need to make?

More trust means more success at work and in our personal relationships. I can help build the trust in your organization. If it’s your time to tackle this difficult issue, I’m here to help. Get in touch.