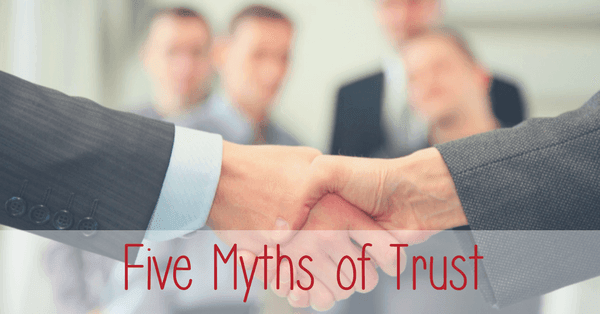 There are some old nuggets that have been around for so long that I’ve seen people quote them as undeniable truths. Don’t believe in something just because you’ve heard it multiple times or read it on the Internet. If you are going to trust and be trustworthy you need to be discerning.​

Myth Five:
Telling people to trust you is a great way to start a trust relationship.

Trust is earned over time. People want to know that your words and your deeds match and that you can be counted on. Words, as they say, are cheap. Actions must match the words.

Myth Four:
The higher up you go in the company, the less you trust that company.

Myth Three:
If you want to be trusted, hide your mistakes!

Let me break this to you gently. No one thinks you’re perfect. When you let others know you’ve messed up, it gives them permission to admit their mistakes and you’re not spending consultant dollars trying to figure out what went wrong in your company. You get to correct the mistakes before they grow like a bad mold and do damage. Not only that, people will believe and trust you more because they know you can be counted on to tell the truth, even when it’s difficult.

Myth Two:
People must prove they can be trusted before you can trust them.

If we go into a relationship believing that the other person needs to earn our trust it changes how we are with them. Imagine meeting someone who treats you like you are untrustworthy, would you be willing to share your best ideas and offer to collaborate? Probably not. We form trust relationships by extending trust.

Myth One:
It takes a lifetime to build trust and only a moment to destroy it.

I don’t know when this snowball started rolling down the hill but trust isn’t lost in one moment. It erodes over time. If trust was lost when we made a mistake, there wouldn’t be any in the world. I love what a colleague, Charles H. Green, from Trust Across America said about this myth:

“If I have a deep level of trust in you, and you screw up a little bit – I’m likely to forgive you, give you another chance, cut you a break. Of course, if you screw up a lot – enough to use up the reservoir of trust we’ve developed – then that’s another matter entirely.”

More trust means more success at work and in our personal relationships. I can help build the trust in your organization. If it’s your time to tackle this difficult issue, I’m here to help. Get in touch.