The look was what got me. It was visible hurt and embarrassment of being put down in front of others over something that should have been quietly discussed in private. If you want people to trust you and show you care about them, praise in public, critique in private. A business issue or a personal issue between friends or loved ones; the same rule applies in both situations.  I don’t know about you but when I see someone being put down in public I think less of the perpetrator and feel sympathy for the person being criticized.

When I am discussing a problem I visualize a triangle. It looks like this. 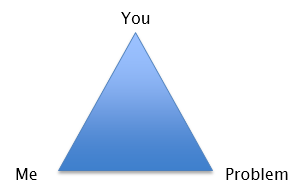 It doesn’t matter if it is an opinion, fact or belief you are debating. When it is around something that creates strong emotions, separate the person from the discussion.  Let’s say for a moment that you are discussing politics or religion, two subjects you’ve been told never to debate if you want to stay civil. Not true. We can and should discuss all things and stay informed to understand others opinions and see other points of view.

My daughter does her research and loves debates… always has. Her Dad and I learned early on when to use the “Because I said so” so we could walk away with our ego’s intact and make sure that she stayed safe. She could and still can talk the birds out of the trees. She learned early on how to use the triangle. She never attacked the person only their argument. Recently she was having a discussion on Facebook, one of the worst places possible for reasonable discourse. The person she was debating soon started making it personal, swearing at her and calling her names. It didn’t get better. It shut down the discussion and she ended up unfriending and blocking the person who escalated the nastiness.

There is a difference between “You’ve been late 3 times this week” and “You’re an unreliable jerk and can’t get to work on time”.   One allows you to discuss solutions; the other has you shutting down and defending your reputation.

If you want to be trusted, praise in public, criticize in private and separate the problem from the person.