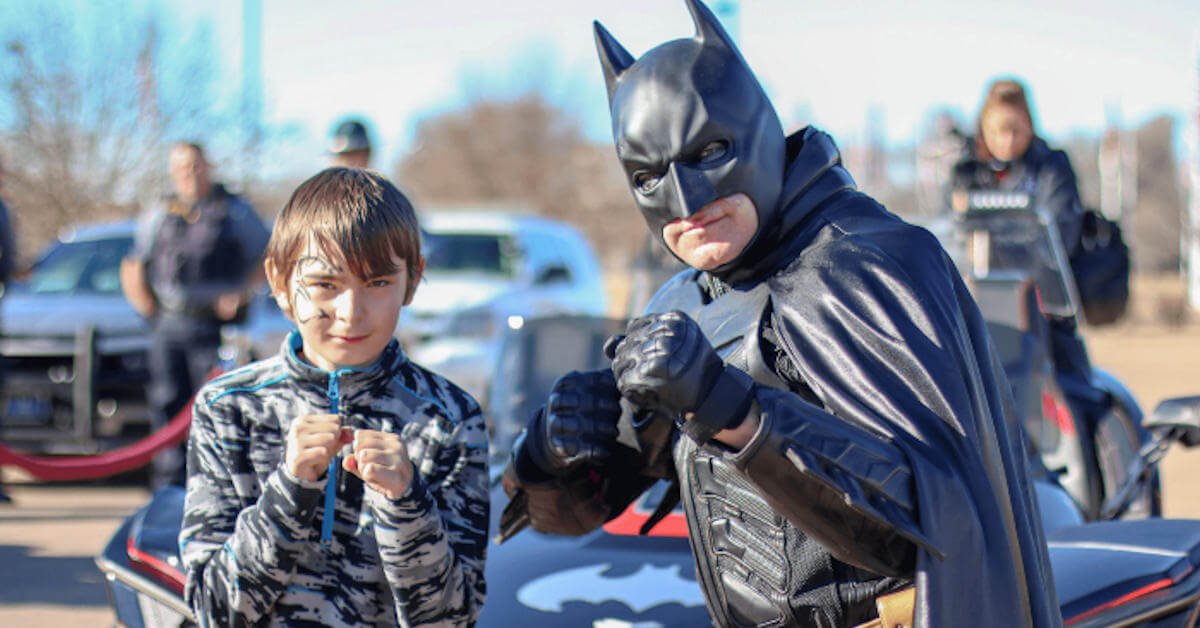 Is there anyone left in the world to trust? How will you know them?

Talk is cheap, so you will know whom to trust from their deeds. In leaders, it has to be more than 15 seconds of sound bites and a few moments of media opps.

I look for my 5 Tenets of Trust in action. Those 5 Tenets are caring, commitment, consistency, competence and communication.

I found all of them in action in a leader from Kansas.

Harry Herington will transform from his role as CEO of NIC into Batman to support charities when children benefit. The idea for the Batman persona came from his employees who nicknamed him Batman because of his background in law enforcement (one of his first jobs was as a police officer), and the fact that he presides over a billion-dollar company and his ability to solve complex problems. For now, his costumes are in the closet, and the batmobile is in the garage waiting for the time when they can be safely brought out again.

It wasn’t the symbol of a bat reflecting against the night sky that told him there was a dangerous threat. It was the mention of a pandemic and Apple saying they weren’t going to make their numbers. After years of continued growth and profits, for a behemoth like Apple to be reporting a loss was a big red flag. Years before, Harry had learned of the SARS epidemic that had threatened but never became a pandemic. Like he does with anything that can affect his staff and company, he read everything he could and what he learned enabled him to react quickly when the COVID pandemic hit the States.

He studies and learns from trusted sources to stay competent.

Harry and his team stayed informed and tracked the numbers. By late February, he could see this wasn’t going away and it was going to get worse. He gathered his senior leaders and made a decision to have his people work from home before the government ever mandated it. Keeping people safe and the company functioning became a top priority. How many CEO’s do you know who put the safety of their people first? Anyone who knows Herington wasn’t surprised that people were the top priority.

Caring is a top value of trusted leaders.

He knew he had to completely isolate himself for the first two weeks of the pandemic as the company transitioned to a remote workforce. Getting sick was not an option. The routine for his day remained the same. Up early and exercise. Leave home and get on the road to go into the office. Except now he slept on a cot in the exercise room, so he was isolated from the rest of the family. The drive on the road was empty of other traffic, and when he walks into his office that used to be a hive of activity, he’s the only one. And besides, as Harry said, “Someone has to water the plants.”

He’s committed to keeping the company going in spite of the personal cost to himself.

How do you shut down offices and at the same time comfort and reassure the employees? It involves transparency and empathy of what this could mean for each individual.

Harry’s become adept at looking directly into the lens of his phone to record videos to share with employees on a regular basis. He knows people are anxious about their jobs. He let them know that they didn’t have to worry about the financial stability of the company. “The company is solid and if anything changes, I will let you know. Before any staff are laid off, benefits will be rolled back. After all, a 401K can be built up again. If that isn’t enough, then salaries will be cut. The last resort will be to eliminate jobs.”

It’s a promise he will keep and he’s consistent with his messaging.

As a highly trusted leader, transparency is a value he lives. Transparency means you tell the whole story, even the bad news.

In one of his videos, he told staff that the prediction was 80% would end up catching the virus. Of that, the majority would get a mild case and most will be fine. He also told them that a portion of the population would die from this.

A trusted leader doesn’t hide from the truth. They communicate openly and honestly.

He asked them to make sure to take care of themselves and to check in with family and friends who need them. He knows that for many of them, their job security and stability may mean they are the only ones able to support other family members and friends who could be laid off.

He got to meet his new grandson for the first time when the baby was 11 weeks old. His daughter-in-law quarantined with the baby so she could meet her father who has cancer and let him meet his grandson. That meant that Harry and his wife could not get closer to the baby than 7 feet. He knows that soon he will get to meet and hold his grandson but right now his daughter-in-law had to make the hard decision.

Harry told me, “You do what’s right.”

It’s a matter of trust.

“A hero can be anyone.”
~ Batman, The Dark Knight Rises ~